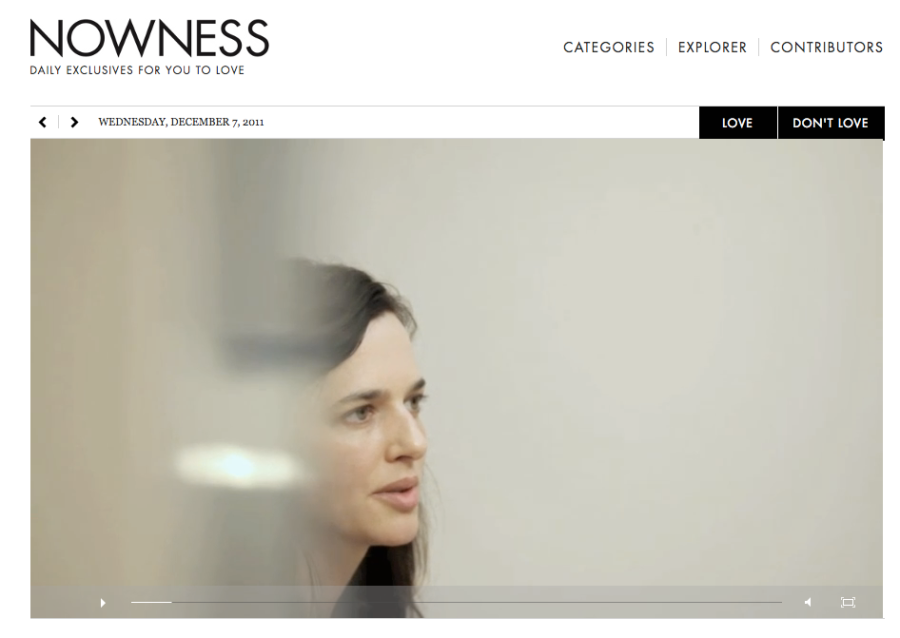 Taryn Simon: Shot True (from the blog NOWNESS)
The Celebrated American Artist Reveals the Ideas Pushing Her to the Limits of Photography

Acclaimed artist Taryn Simon questions meaning and photographic truth while exploring the evolution of her work in filmmaker Matt Black’s new short. Playing upon an uneasy marriage of image and context, Simon blurs the lines between reportage, conceptual art and portraiture.

Her latest and best-known piece, A Living Man Declared Dead and Other Chapters, juxtaposes portraits of subjects ranging from victims of genocide in Bosnia to the body double of Uday Hussein with census-like text and abstract imagery. Featured this year at the Venice Biennale, Tate Modern, London, Neue Nationalgalerie, Berlin, and opening at MOMA in New York in May, the piece is an exhaustive and poetic exploration of bloodlines and man’s will to survive. Trained as a photographer, Simon started out shooting for The New York Times before winning a grant to pursue her first project The Innocents, a series of portraits of people wrongly convicted of crimes that explored the ambiguity of photography. With An American Index of the Hidden and Unfamiliar she unveiled secret sites within America hidden from mainstream consciousness while Contraband disclosed the nation’s fears and desires through the mundane items and counterfeit goods smuggled into the US. “Even as she is stripping back her images, they are always beautiful,” offers Black. “There is always a political element, a sense of paranoia, and government.”

A Living Man Declared Dead and Other Chapters by Taryn Simon is at the Tate Modern, London, until January 2 2012, and opens at MOMA in New York on May 1 2012.